As thoughts turn to remembrance on this year’s hugely significant Armistice Day, leading genealogy and family history site, FamilyRelatives, is urging people to discover more about their military past, using their incredible archive of over 20 million military records. This week marks 100 years since the beginning of the First World War, and FamilyRelatives has more than a million records from this specific time period alone, allowing users more insight than ever before, into their own military lineage.


FamilyRelatives will be commemorating the occasion with the release of a booklet made up of 26 infographics, a totally free download for all visitors to the site. Packed full of fascinating facts about the war and the people who fought in it, the infographics are sure to satisfy the appetite of anyone who has ever wondered whether their relatives played a part in one of the most infamous battles that ever took place.


A spokesman for the site, which has millions of records dating back centuries, says, “This week will mark an incredibly significant milestone in human history – the centenary of the beginning of the First World War. At FamilyRelatives, we always notice an upswing in people searching our site around the time of Remembrance Day, as their thoughts turn to the sacrifices their ancestors made – and we anticipate that this year will see more visitors than ever to the site.”


He adds, “Many people will realise that they have no idea whether their own relatives were involved in the Great War, or if they were, what part they played in the war effort. The centenary is the ideal opportunity for them to discover more about their ancestry and their lineage, as the world remembers the noble sacrifice made by so many.”


The infographics is available to download for free to encourage more people to think about their family history in the context of the Great War. The graphics are packed with interesting snippets of information that bring home the reality of the war for so many – for instance, the youngest British soldier to die in World War I is thought to have been just fourteen years old, while the oldest man to die as a result of war wounds was a Lieutenant at the age of sixty-eight. ‘Smith’, ‘Jones’ and ‘Brown’ were the most common surnames of men to die in the war, and 628 of the 1,357 Victoria Crosses that have been awarded throughout history came from World War I. 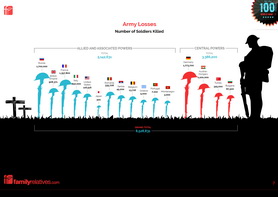 
The spokesman for FamilyRelatives adds, “As time passes, many people can feel detached from the shocking events – but finding out they had a relative fighting in the war, or helping the war effort in the UK, can bring it all home for many individuals. In order to mark 100 years since the war began, we’d like to encourage more people to sign up for access to our unique archive of military records. We can’t think of a more fitting way to remember those who passed than by acknowledging their contribution in this way. As the famous poem goes – ‘At the going down of the sun and in the morning, we will remember them’.

For more information about Familyrelatives' extensive military records, or to search the database, visit the website:

The Census returns are now available online on Familyrelatives.com in Beta

Pricing Information
About the Census
The 1841 census is the earliest census generally used by family historians, the census is also known as the Census returns.
The Census is a series of questions asked of every household in England & Wales which allowed government to identify the necessary resources. Each of the households were then catalogued into regions – from County to District to Parish and then to Village and Street. Furthermore their Surnames and Forenames were recorded together with their Position within the household as well as their sex, occupation and place of birth.
All this information was recorded in a series of pages which again were categorised into forms which were bound into books called folios. Each folio was then subdivided into Pages.
As well as Households forms were distributed and collected by enumerators to every hospital, ship or institution including boarding schools.

Thank you for visiting the http://www.familyrelatives.com/ blog here you will find information on the site's latest developments, history news and events.